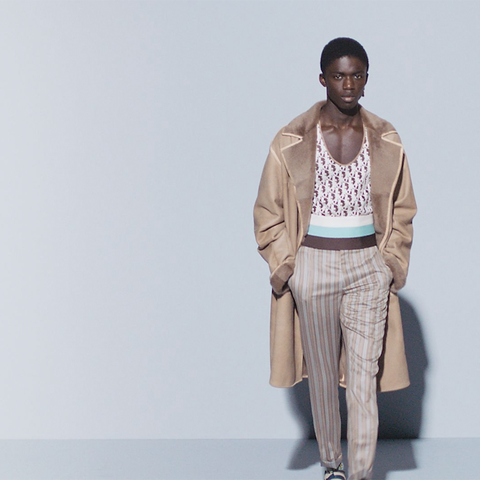 From Miami to a bubblegum moon in a faraway galaxy; neo-Tokyo to the New Romantic London of the late iconoclast stylist Judy Blameim电竞官网-, Dior has a habit of taking its guests (by way of a runway show) to far-flung lands anew. Since then, the industry – and the entire globe – has found itself in a new world entirely, and not one of Dior's creation or control. You could forgive a fallow year, then. But Dior's knack for world building remains unfettered, and rather than sink into staycation mode for its S/S '21 menswear showcase, the maison simply used a decent broadband connection to catapult us into a new place entirely with a video release.

Which may sound relatively middling in the grand scheme of menswear-y things. But upon the opening shot of work-shy waves sluggishly breaking upon the shores of an unknown land ('ACT I', a very French title card tells us, 'Portrait of an Artist'), Dior's world tour continues a tradition set by Monsieur Dior himself. "He was global," creative director Kim Jones told Esquire in an interview last year. "He had a big relationship with Japan – that's why we did the first show there – and when he started Dior, he had an American publicist." Though this time round, we're in Ghana. Specifically, the inner sanctum of portraiture and figuration artist Amoako Boafo. As he talks of his working processes, we see his working processes – a fine form of fingerpainting – and one curtain is already torn down: we see an artist at work, as opposed to the finished work in a gallery.

Jones first met Boafo in Miami's Rubell Museum – "artistic love at first sight" say the show notes – and a collaboration was born. His hi-vis, graphic work is applied to Dior's designs, alongside ivy prints that hark back to the maison's archives, and still within the punchy yet wearable vein of Jones's signature. Classic, crisp shirts counter bursts of radioactive colour, while floral clashes make for relaxed companions that really don't mind sharing a bed. Jones's thought process soundtracks the first chapter – he spent time growing up in Africa, and he wanted to work with an African artist – and again, the restrictions of a runway show are dissolved. He isn't confined to one A4 side. He can tell us exactly what he was thinking and we see those exact clothes.

And the clothes are very nice. Wearable in their classic(ish) bracket, yes. But also wearable because they look beyond the Age of Hype: logomania is sparing, sharp silhouettes are Parisian in the Oxford Dictionary sense of the word. The camera quickly flashes through each look, and we're privy to a collection that packs fun and function. Menswear is not, and should not, be a simple binary choice. Jones has long understood this.

Then 'ACT II' begins (marked by another very French title card), and Dior ventures north –skyward north – to a heavenly, dreamlike sequence in a world that Jones and Boafo have seemingly created in tandem. Models in whetted jackets and coats and yes, that special ivy-printed shirt, blur in and out of view, and these clothes, which are very well-suited to reality, thrive in pure fantasy, too. What's more, the video's global release broke down the usual order of things. It wasn't just press and buyers and famous people that enjoyed a first look. It was everyone. And after traversing planets and Miami and futuristic visions of Tokyo, Dior has created a vessel big enough to accommodate everyone on its trip to Ghana, and the gates of heaven. This new world may seem a world away from the last. And yet, its that very thing that has helped Dior create something ultimately new: a brave, and better, new world indeed.