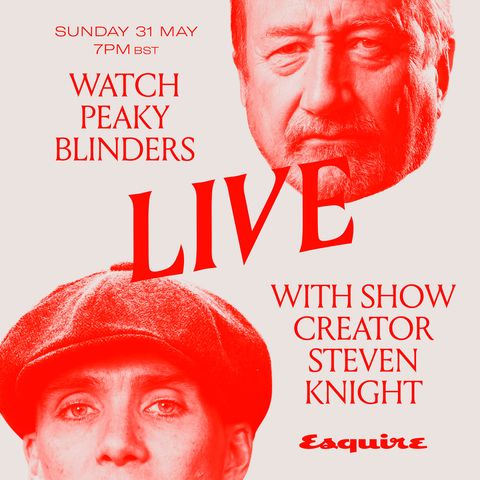 Update: Huge thanks for Steven Knight for an insightful, funny and revealing Peaky Blinders im电竞官网-watchalong. We hope you enjoyed it as much as we did. If you want to watch it again – or missed it the first time round – you can now enjoy the full video, above, whenever you like.

im电竞官网-Keep an eye on this website for details of our next, very exciting watchalong, which will be announced soon.

Original article: It's difficult to overstate the cultural impact of Peaky Blinders, perhaps the most important British drama of the past decade. Not only has it achieved transatlantic success and influenced the way that men dress, but it's also garnered its own festival and caused an uptick in 1920s baby names. From the moment Cillian Murphy and his baker boy cap first emerged onto the streets of Birmingham in 2013, the show has been a revelation.

That's why we asked Peaky Blinders creator Steven Knight CBE to join us for a live watchalong of the brilliant season five finale, 'Mr Jones', on Esquire UK’s , and feeds on Sunday 31 May at 7pm BST (2pm ET for American viewers.)

The 61-year-old screenwriter/director be taking us all behind the scenes of the hit BBC crime drama, discussing the show's future, as well as interacting with his legions of fans – which, of course, is where you come in.

im电竞官网-We need you to supply us with all the unanswered questions you have about the episode, as well as the series as a whole. Send them over to us via our , and pages now for a chance to get them answered by the main man himself.

Then on the day, we'll all press play on Peaky Blinders (rental options are listed below) at the same moment as Steven, and listen along to his play-by-play analysis and commentary in real-time.

im电竞官网-In the season finale, written by Knight and directed by Anthony Byrne, Tommy Shelby meets with Winston Churchill to discuss his relationship with Oswald Mosley. The fascist politician is set to lead a rally, and Tommy believes that it provides the perfect opportunity to strike against his rival.

im电竞官网-Head on over to Esquire's , and feeds right now to submit questions, and get make sure to tune in on Sunday 31 May at 7pm (BST) on our , too.